The NIE on Iran’s nuclear weapons program has sparked an ongoing controversy about the nature of the Iranian regime and its intentions. While the Iranian regime appears to have halted its nuclear weaponization program in 2003, it continues to research ballistic missiles and, most importantly, acquire fissile material (which is the hardest part of building a nuclear weapon.) Putting aside the inherent uncertainty of any intelligence estimate, it is quite feasible that scaling back the weaponization program was a tactical move because the regime was having technical difficulties. The centrifuges used to enrich uranium are sophisticated and fragile – running thousands of them for long periods is no small technical challenge. These technical challenges are not insurmountable so the real question remains, “What is the nature of the Iranian regime?”

Iran’s sponsorship and execution of the AMIA bombing in Buenos Aires, the largest massacre of Jews since the Holocaust, should be a reminder that this is a regime that uses terrorism as tool of diplomacy.

AMIA, the communal offices of the Argentine Jewish community, was struck by a massive suicide truck bomb on July 18, 1994 – 85 were killed and over 200 injured. Iran and Hezbollah were suspected from the beginning. The Argentine investigation has had several false starts and has been mired in corruption, but in recent years has gotten on track. Last month Interpol voted overwhelmingly to issue a red letter calling for the arrest of five Iranians (along with Hezbollah’s external operations chief Imad Mughniyah) on the basis of the Argentine investigation. The publicly available report on the AMIA bombing offers tremendous insight into the Iranian regime’s modus operandi and worldview.

Below are two network graphs (for more on the graphs and my research at the University of Maryland see the end of the post). The first graph illustrates the web of interconnecting people and events that carried out the bombing. The second graph is the network linked to Mohsen Rabbani, the cultural affairs attaché at the Iranian Embassy who was the operations coordinator for the attack.

Graph of Events Linked to the AMIA Bombing 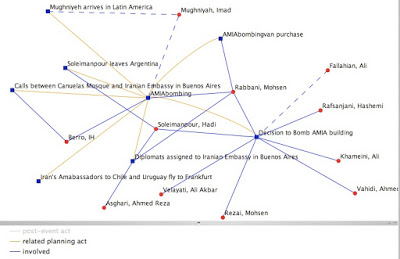 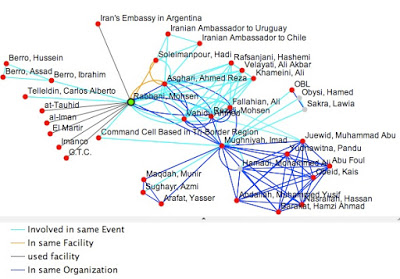 In the first graph, red nodes represent people and blue square nodes are events. The blue lines (edges in network graph lingo) represent a person’s involvement in an event (dotted lines represent uncertainty as to whether a person participated in an event) while the yellow edges represent events that came before the central event (in this graph the AMIA bombing.) A few things become apparent, particularly the central role of Rabbani in pulling the attack together and the number of Iranian diplomats who left Latin America just prior to the attack.

The web of events helps shed light on Rabbani’s network graph. The yellow lines linked to Rabbani indicate the diplomats serving at Iran’s Embassy in Argentina. The dark blue edges linking Rabbani and several others, including Mughniyeh, represent the individuals named in the Interpol letter. In this graph the light blue lines are particularly important, they represent the people who were in an event together. The main tangle of blue that includes Rabbani and also then (and possibly future) Iranian President Rafsanjani, Supreme Leader Ali Khamenei, and then intelligence chief Ali Fallahian is the planning session in which the decision to bomb AMIA was made that reportedly took place nearly a year before the bombing on August 14, 1993 in the Iranian city of Mashad.

Many of the light blue edges represent specific events linked to the bombing. Carlos Alberto Telleldin was the man unfortunate enough to sell Rabbani the used Renault Trafic van used in the bombing. Rabbani had been visiting rental agencies for some time looking for a similar vehicle. There was a web of calls between Rabbani and the Tri-Border region, where Mughniyeh had established coordinating cell. That was apparently where the suicide bomber, Ibrahim Hussein Berro was prepared for the task. The light blue edges between Berro and his brothers Assad and Hussein represent the phone calls he reportedly made to them in his final moments. The gray lines linked to Rabbani represent the web of mosques and business fronts he helped establish in Buenos Aires. Rabbani had been based there since 1983 and had built an extensive network, which also bombed the Israeli Embassy to Argentina in 1992.

Looking at the graph, the central role of Hezbollah’s operations chief Mughniyeh in international terrorism becomes evident. The prominent dark blue cluster represents Hezbollah’s leadership. The smaller clusters represent his links to al-Qaeda (Mughniyeh met bin Laden in the mid-1990s and established an al-Qaeda-Hezbollah alliance) and his links to Fatah (Mughniyeh got his start in Arafat’s praetorian guard – Force 17.)

The overall story told by these graphs is of Iran using its Embassy as a base for a terror attack and working seamlessly with Hezbollah to carry out a complex operation on the far side of the world. The nuts and bolts of the operation were revealed by forensic evidence such as the paper trail telephone logs, travel records, and financial transactions, along with the serial number of the truck bomb. The weakest portion of the case deals with the planning meeting in Mashad and the involvement in Iran’s top leaders (it was based on testimony by a defector). Yet it is difficult to imagine a pair of major operations (remember the 1992 Embassy bombing in Argentina) being launched from the Buenos Aires Embassy with the regime’s top leaders being unaware. Rafsanjani and Khamenei are now the moderates who are checking Ahmadenijad’s eschatological ambitions.

The AMIA bombing was, in part, to avenge Israel’s abduction of Hezbollah officer Mustafa Dirani and Israel bombing in Lebanon. But it also had another angle – Argentina, under U.S. pressure, terminated arrangements to share nuclear technology with Iran. A regime prepared to flout all diplomatic norms to commit mass murder halfway around the world over its nuclear program is not likely to give it up so easily.

Even if Iran has forsworn nuclear weapons, its links to international terrorism are deep and should weigh heavily in any assessment of its intentions.

About the Graph and My Research at the University of Maryland
A brief description of my dayjob using the Semantic Web to research terrorism is here.

While I will continue on this project, I also have a new position (still with the University of Maryland) with the Laboratory for Computational Cultural Dynamics which seeks “to develop the theory and algorithms required for tools to support decision making in cultural contexts.” That is, we hope to develop computer systems that will help model how different cultures act and react in different situations. When these models are developed they can be applied to a range of issues including counter-insurgency, development, crime prevention, and disaster relief.

I also hope to do some posting on my work there soon.