In the span of week, there were two attacks against hard targets, the September 17 attack on the U.S. Embassy in Yemen, and Saturday’s strike on the Marriott Hotel in Islamabad. Al-Qaeda and its affiliates still face difficulties launching attacks in Western countries, due to the difficulty of transporting the necessary experienced operatives to the West in the face of diligent and capable Western security services.

But these attacks highlight growing capabilities within the greater Middle East, where security forces are not as skilled and the operatives move with greater ease. Both of these attacks were against targets with formidable security, and the success of the Marriott attack indicates the limits inherent in hardening targets and the potential for enormous quantities of explosive to overcome security measures. This tactic will become more widespread where terrorists possess the necessary logistical and technical capabilities.

The attack on the Embassy in Sanaa, Yemen was a sophisticated, multi-pronged strike that included two carbombs and gunmen (a State Department briefing describing the attack is here. Although the attack took ten lives, it did not penetrate the Embassy itself. There may be lessons learned from this semi-successful attack that can be incorporated into future strikes – but Embassy security will also adapt. However, the fortress-like status of American Embassies around the world exacts a high price on U.S. efforts to conduct effective public diplomacy. The Marriott is a hotel. While Embassies can adopt extensive security procedures at some cost to their effectiveness, hotels cannot pay that same price.

What the Yemen attack attempted to achieve by guile, the Islamabad attack managed by sheer brute force. Marriott security appeared to have worked. The truck was kept away from the building, detonating at a blast wall some 60 feet away. (This image from BBC makes it look like the blast was closer to the building – but the crater created by the explosion itself was 60 feet wide.) There were reportedly 600 kg of military grade explosives (about 1400 lbs) on the truck. By comparison, the primary explosive in the Bali bombing (in which 202 people were killed) included about 150 kg of explosives (and some reports indicate that only a portion of them detonated.) Had the truck been able to reach the Marriott itself, the immediate damage might have been far worse. 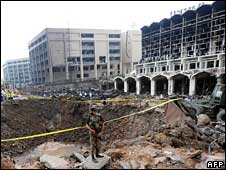 Terrorist activity requires logistics, and the more extensive the attack, the greater the logistical support needed. The ability to assemble and transport such an enormous bomb without being detected gives a sense of the perpetrator’s capabilities and is a very deep cause for concern.

It is worth noting that the Islamabad Marriott had been targeted before in January 2007 when a suicide bomber attempting to enter the hotel killed a security guard. The failure of the human missile approach may have helped lead the attackers to adopt the brute force approach.

The bomb was laced with aluminum powder, an accelerant that, after the explosion ignited a gas leak, intensified the blaze. This led to more casualties and complicated the rescue effort. In the right circumstances, these cascading effects – such as fires started by explosions – can be a devastating force multiplier and may also become a component of terror attack planning.

Initial reports indicate that Pakistani firefighters acted bravely (their actions probably prevented the building from collapsing), but lacked the appropriate equipment and training and that the Marriott’s fire system did not respond properly. The city government is apparently engaging international consultants to assist in building firefighting capacity. (My recent post – Fire as a Tool of Terror – discussed some of these issues in detail, particularly the importance of firefighting diplomacy.)