Lessons from the Bay of Pigs to the Shores of Tripoli 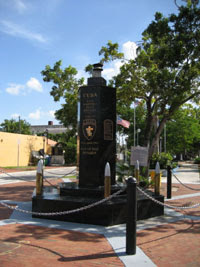 Despite the historical changes roiling the Middle East, this blogger has been quiet. I’ve been on vacation in Miami. While I’ve kept an eye on email, cable news, and Twitter, Miami is a very distracting place and I’ve been unable to concentrate on the deeper analysis necessary to shed light, not heat on events. (Although I did manage a quick post about Biden’s role in the current crises on this blog’s sibling.) Anyway, as my friend Ilan Berman observed just before going on a recent vacation, “Whatever, let this play out, I’ll be back in a week, it’ll still be going on. It’s no big deal.”

But one thing I saw in Miami was profoundly thought-provoking. Wandering along Calle Ocho, the heart of Little Havana, we came to the memorial for those killed in the Bay of Pigs operation. The Bay of Pigs is THE case study in Presidential fecklessness and poor decision-making. This is certainly worth considering as the US backs into Libya’s civil war.

But that is only the first level. The memorial is a reminder that, however I’ll-considered, the individuals who gave their lives there believed that they were fighting for freedom and that Cuba was (and is) under a monstrous tyranny – freedom matters. It is also worth remembering that Castro overthrew Batista, a classic LatAm tinpot dictator, not a good guy. Could the US have paid more attention to human rights and freedom in Cuba and less to it’s business interests in the decades before Castro’s revolution? (It is easy enough to criticize the US’s imperfect record in this regard – but few great powers in history have even tried as much as the US, and actually fostering reform is a difficult achievement.)

Castro was of course a darling of the international left, but like so many other 20th century dictators he proved far more evil then the corrupt authoritarian he displaced. (There is an old story of the two old Polish Communists who had been imprisoned together in the1930s. Meeting decades later in NYC they recall who they had sat together in their cells and railed against Marshal Pilsudski as a terrible dictators. Then they nod, saying, “We didn’t know anything about dictators then.”) This was the point of Jean Kirkpatrick’s classic essay, “Dictatorships and Double-Standards” – sometimes supporting our SOB is both the prudent and even moral thing to do.

Finally, even if, somehow the Bay of Pigs could have been successful, it might have had other costs. Latin America has had a long, difficult experience with US intervention. Another American-backed coup might have inspired greater anti-Americanism throughout the region increasing the costs of collaboration between the US and Latin America.

Food for thought as the president attempts to protect US interests as country, after country in the Middle East undergoes turmoil.

Update
Another, of the myriad possibilities is what if Bay of Pigs wasn’t defeated quickly, but also wasn’t strong enough to overthrow Castro plunging the island into an endless civil war.

PrevPreviousJoe's Got no Action
NextTo Wonk is not to KnowNext