Research at the Nixon & Reagan Libraries

For Presidents Day, I contributed a post to The Text Message, a blog of the National Archives, about my recent experience doing archival research. The original post is here.

On a recent family trip to LA, I thought it would be worthwhile to visit the archives at the Nixon and Reagan libraries.

Using the Archives
I know a great deal about vice presidents, but having never done archival research before, I put in calls to chat with the archivists and learn a little bit about what I was getting into. They were extremely helpful. There are extensive descriptions of the archival holdings online and the archivists urged me to identify what I was interested in, so that they could pull the boxes and have them waiting for me.

Picking what I wanted at the Nixon library was pretty easy. The vast majority of Nixon’s records are about his presidency. But I was interested in the Nixon vice presidency, so I identified a relatively small number of boxes relevant to my research.

The Reagan archives was a bit more of a challenge. Reagan was never the vice president and there were only a few boxes referring to his vice president George H. W. Bush. Fortunately – this is all still over the phone – Jennifer Mandel, my contact at the Reagan Library, came to my rescue.

First, she explained that if I wanted to see documents about Bush, I needed to visit his library. Then she gave me a short course on the nature of archival research. In essence, a researcher needs to come in with some fairly specific ideas of what they seek – otherwise they will simply wade through endless masses of paper. Since I am looking for instances in which vice presidents persuaded presidents to adopt policies, I needed to have a pretty good idea of what policies I was interested in and then start looking for the paper trail.

She was not discouraging me, only explaining the practicalities of my endeavor. It is further complicated because a great deal of modern interactions between the president and vice president are informal and not on paper.

However, I had previously written a paper about a working group on terrorism led by Vice President Bush (and studying terrorism is my day job, so I had an additional interest.) So we agreed that should be my focus.

A week later, at the archives, I settled down to actually do my research. It is most helpful to the archivists if the researcher has already submitted requests for particular boxes – but they will do their best to pull them in a timely manner. Facilitating public access to the documents is the critical mission for the archivists, and from what I saw they take it very seriously.

There was a form to fill out – no big deal – and some basic explanations. The archivist monitoring the research room must be able to see the researcher’s hands (documents have been tampered with and pilfered.) Also, documents should be handled carefully. In particular, the archivists need to do any staple removals. There are copy machines available, but through the miracle of technology, a celphone camera can serve as a scanner! There are plenty of smartphone apps that facilitate this – but a camera with just a few mega-pixels will provide a decent image.

Nixon as VP
At the Nixon Library, much of the correspondence was work-a-day material focusing on vice presidential appearances. Nixon is an interesting case, he played a more active role then previous vice presidents, serving as campaigner-in-chief so that Eisenhower could appear to be above the political fray. But this activity did not necessarily translate to influence for Nixon. Recent vice presidents have had offices in the White House. Nixon did not. Many letters from Eisenhower were requests for meetings. In more recent years, if the president wished to meet his vice president, he could just send an aide down the hall. But, at the same time, Nixon was not excluded from the process. He was a regular attendee at Cabinet and National Security Council meetings. In fact, during periods of illness, Eisenhower instructed Nixon to hold and chair these meetings in the President’s absence in order to reduce concerns about Eisenhower’s health and its impact on the functioning of the government. 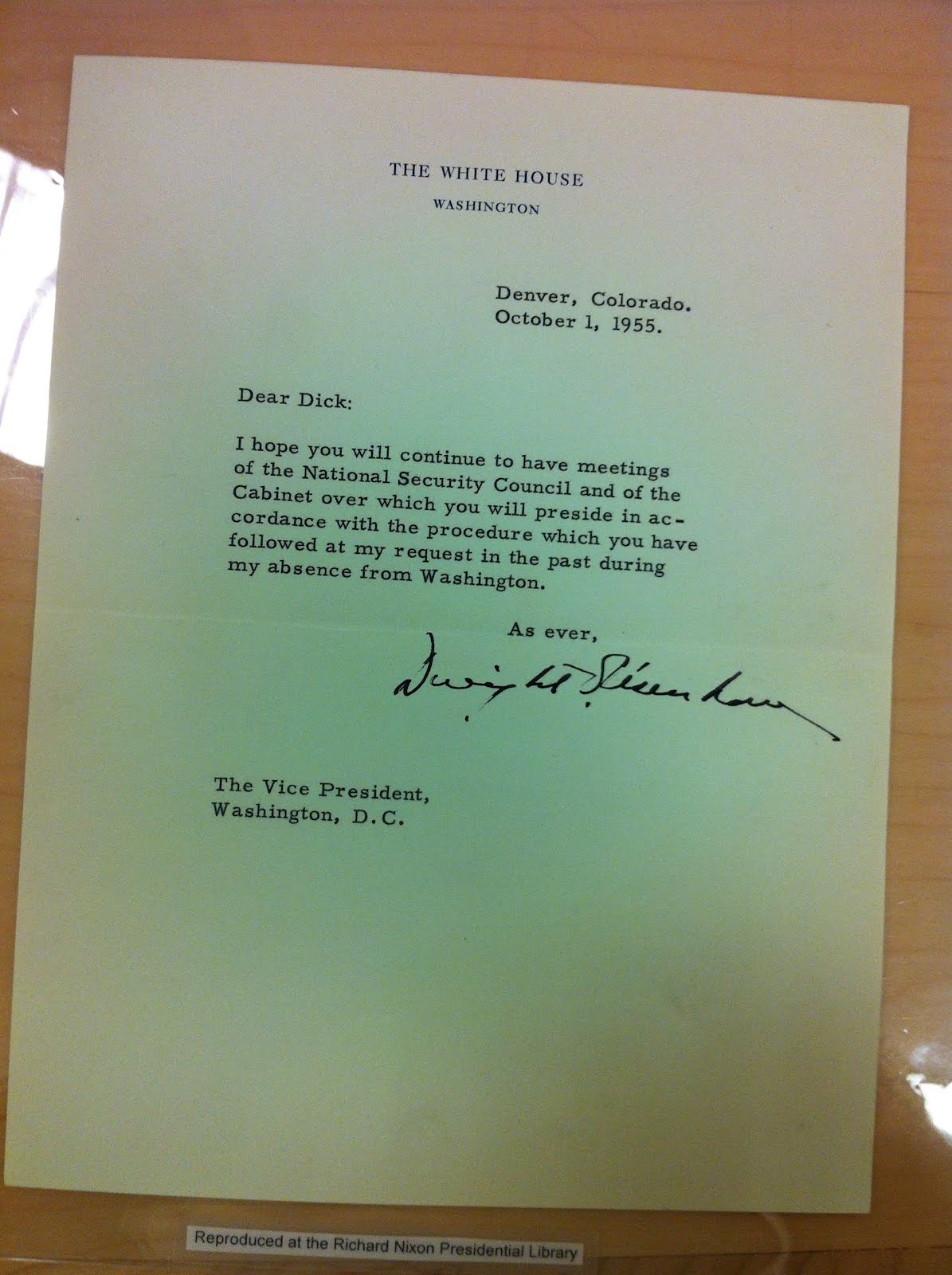 There were also a number of letters in which Eisenhower warmly thanks Nixon for his efforts and contributions.

Still, it isn’t clear if this meant that Nixon had much influence. This particular memo seemed intriguing. I don’t know the back-story, but it looks like the kind of note a boss sends when he wants an issue dropped.

The picture that appears of Nixon’s vice presidency is that while he took on whatever tasks he was given ably, he was perhaps not in Eisenhower’s inner council of advisors.

VP Bush Combatting Terrorism
In contrast the documents for the George H. W. Bush Vice President’s Task Force on Combatting Terrorism were voluminous and making sense of them is a real challenge. Still, there are interesting places where the internal bureaucratic machinations are exposed. One of the purposes of the Task Force was to help get the various government agencies concerned with terrorism working together. The hand-written notes attached to copies or on copies of the report give a real sense as to how that process worked. 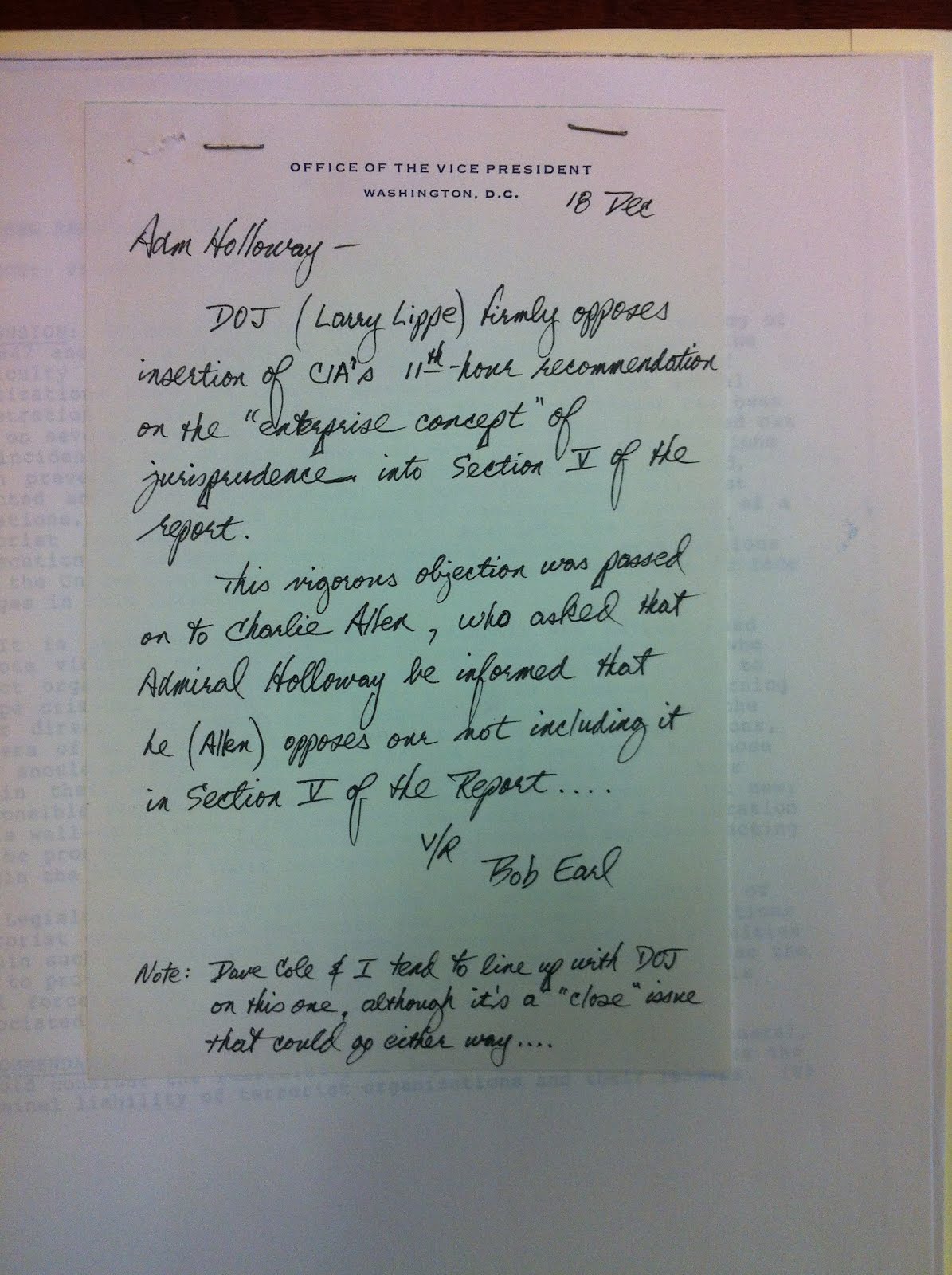 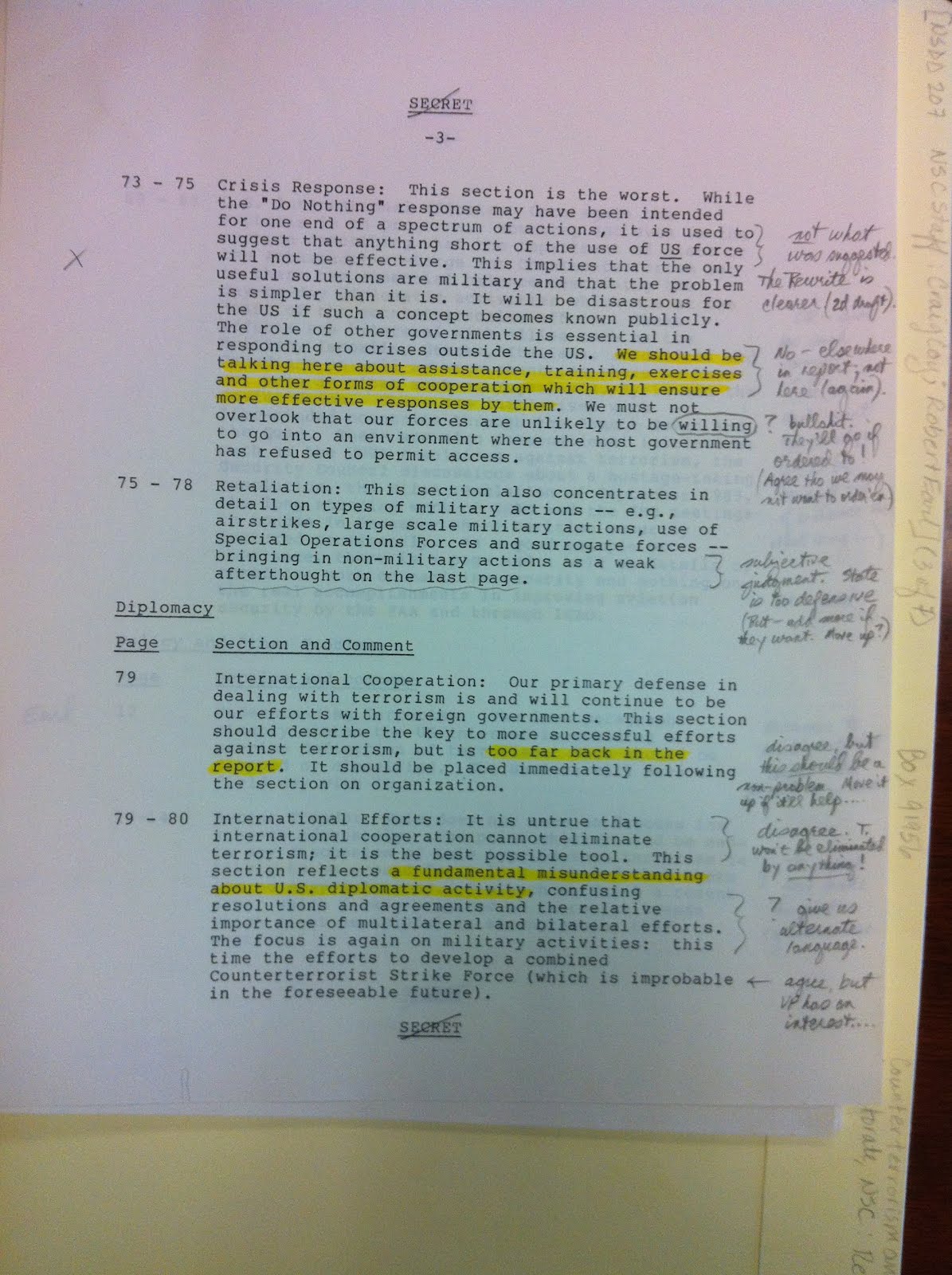 Reagan’s library is also located high in the hills overlooking Simi Valley. It is breathtakingly beautiful.

I was told that the sunsets there are spectacular, but I couldn’t stay. However, when I stepped outside of the Nixon Library the sun was setting. I stood for a time and contemplated the great question of Presidential studies: Is it the man, or is it the moment, or is it perhaps a bit of each?