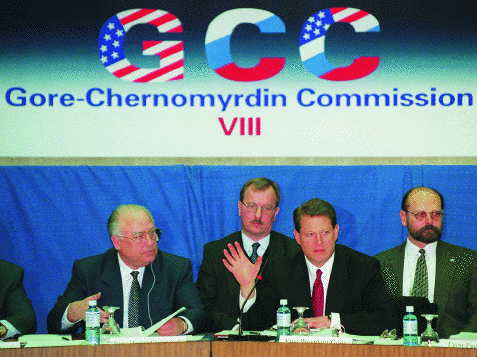 My case study on the Gore-Chernomyrdin Commission (here are the slides for a quick overview) has finally been published in full by the Project for National Security Reform. It is in the second volume of PNSR case studies, which contains a number of other interesting case studies besides mine on topics as various as Eisenhower era policy-making in the Middle East, managing the Asian financial crisis, and the failed attempt to assassinate Ayatollah Fadlallah. In particular, I recommend Chapter 9 on U.S. Interagency Efforts to Combat International Terrorism through Foreign Capacity Building Program by my old CTBlog colleague Michael Kraft and Celina Realuyo. Capacity building is very expensive, hard to do, and takes a long time – but when it works it really does leave a nation with stronger institutions that will serve it will in areas far beyond counter-terror. Regardless, the price is right, this 1000+ volume can be downloaded for free.

Lessons Learned in Retrospect
I’ve learned a few things since I wrote on the Gore-Chernomyrdin Commission. Not more details about how policies were made and implemented, but bigger picture issues.

Humility in Evaluating Decision-makers
First and foremost I went into this project prepared to excoriate Gore and Clinton for blowing it with Russia. If only they had adequately championed economic and political freedom we could have seen a Russia transformed. Having researched the issue, I know see that they played the hand that they were dealt about as well as could have been expected. There were many policies that had to be balanced and they made tough calls in balancing them. For example, the administration as unwilling to take Russia to the mat over its dealings with Iran because for all of his flaws Yeltsin really was seen as a least bad option and there were a number of other security issues on which Russia was cooperative.

This understanding has informed my research since and is shaping my attitude towards studying policy-making. Leaders usually have pretty good reasons for what they have done and are constrained by circumstances external and prior to their own efforts. In my research I am agnostic about the policy itself, and instead am focused on how it came to be.

The American Transformation Chimera
My initial criticism was off base. The idea of transforming Russia into a free market liberal ally was in fact the very ambition of Clinton and Gore. Clinton called Russia the “California of international politics.” There is something very American about this ambition – the following administration took a stab at it (at much greater expense) in Iraq. My favorite novelist Robertson Davies has observed that the United States is the most extraverted power in the world and (while he grants it has many virtues) suffers from the extraverted desire to re-shape the world to its liking. In short, culture matters. The Russia transformation experiment was far, far cheaper then the Iraq endeavor but in retrospect it looked awfully unlikely to succeed.

Unfortunately (as an extraverted American maybe) I cannot quite give up the transformation ideal. Re-shaping the world in the American image is not appropriate. But simply ignoring truly vicious regimes such as that of Iraq or what has prevailed in Russia for most of the 20th century does not seem moral. Davies is a Canadian (he argues that Canada and Russia are two terribly introverted powers), but the truth is that for all of Canada’s complaints about US influence – in fact the United States has not significantly sought to re-shape Canada.

Let’s step back – I am arguing IR with a dead Canadian novelist, that’s a bit ridiculous except that I love his writing so much. The point here is that wholesale re-shaping other nations either with a scalpel (as in Russia in the 1990s) or with a hammer (as in Iraq in the past decade) does not appear to be possible.

But there is an objective measure of good governance that needs to be observed. Unfortunately, finding ways to move nations (like my current obsession – Pakistan) along those lines remains a tremendous challenge. More modest and subtle tools are needed.

Financial Angles
Finally, when I wrote this case study I was essentially ignorant of international economics. I have since taken a class on the topic so my ignorance has only been ameliorated by the distinct knowledge of just how ignorant I am (the first step to wisdom?) But the physics of money mattered a great deal to Russia in the 1990s (actually it matters a lot all the time) and shaped the other issues.

As I wrote, many Russians saw the United States allied with corrupt oligarchs as part of a plan to keep Russia weak and impoverished. Some of this reflects on the paranoid mindset of many Russians. American observers viewed it as another deal with the devil to buy short-term stability. BUT – while there certainly was corruption in Russia in the 1990s – there was also a tough economic reality. Russia did not have a functional banking system, so anyone who had access to assets with any value had every incentive to get their money out of Russia. This was not good for the ruble. Unfortunately, it may have been pretty good for the US economy. Russia’s economy dollarizing kept demand for the dollar high and as a consequence, US interest rates could remain low. At the same time, Russia’s economic free-fall kept their energy demands low so that there was more to export on the international market – cheap energy prices are great for the US economy. I truly doubt that Clinton, Gore et al had a devious plan here (and the US economy probably would have prospered in the 1990s regardless because of many other factors). But for a weak paranoid Russia, one can see how this interpretation took hold.

Again, no conspiracy is suspected, but it is possible Gore did not play a consistently helpful role on economic policy. In 1993 Gore criticized the economic reforms for hurting the Russian people. This was echoed a few days later by the State Department’s Russia point-person Strobe Talbot who said the Russians needed “less shock and more therapy…” Treasury felt undermined by this comment. Of course, in fairness, Russia banking sector might have been beyond reform. But this incident may have effectively placed political concerns above economic ones on Russia policy.