Meeting an Old Friend at D-Day: Part I

Today is the 68th anniversary off D-Day, the
Normandy Landings.  Some time ago I
listened to British military historian John Keegan’s masterful Six Armies at Normandy.
Keegan had been a boy during the war and was relocated from
London to rural East Anglia.  Although he
followed events carefully and with great interest the war only touched his life
peripherally – until the Americans arrived. 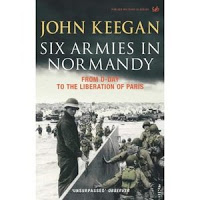 They came in great numbers, driving machines the likes of
which had never been seen in this rural backwater.  They were charming in their friendly openness
– a nice counterpoint to the stuffy manners of the local gentry.  GIs would readily toss candy to children –
more sugar then most English children were seeing in a month.  He was awed by the bottomless wealth of United
States.  He also noted wryly, (this, like
all quotes here is inexact and from my memory, as I leant my copy away) “There
was something happening in East Anglia about which Mr. Hitler should be deeply
concerned.”
And this was only the advance engineering team, constructing
temporary quarters.  American soldiers
flooded the countryside and then, quite suddenly they were gone.  The next day Keegan remembers waking to the
sound of an enormous buzzing.  He looked
up and the sky was full of airplanes.  It
was June 6, 1944.
In his book, Keegan writes a chapter on the six armies that
participated in the Normandy campaign: the Americans, the British, the
Canadians, the Poles, the French, and the Germans.  One of his great strengths is shuttling
easily between the grand strategic and the small-scale tactical.  He does this particularly well describing the
Americans.  Having discussed the enormous
resources of the United States and the strategic vision of Eisenhower in
masterminding the operation, he then focuses on the American parachutists who
landed the night before the main landing.
They were successful beyond anyone’s expectations in sowing confusion in
the German rear.  On paper the allies had
vast resources, but battles are often truly decided by small units, frightened
and far from home, with little to rely upon but their own courage and
ingenuity.  Here the American
parachutists shone, had they been unsuccessful it is not impossible to imagine
the invasion itself would have been a bust.
The Canadians also sent a major contingent to the D-Daylandings, but Canada had inadvertently made a major, albeit bloody,contribution to D-Day almost two years earlier.
Churchill had developed an ill-conceived plan to seize the port of
Dieppe.  The primarily Canadian forces
pushed directly into fortified German positions and took very heavily
casualties.  The read was a complete
disaster – and yet – it taught the allies valuable lessons about how to conduct
amphibious assaults, while persuading the Germans that the allies would not
attempt such an operation again.
Keegan writes respectfully about the Germans, who were
primarily Wehrmacht and fought honorably (with a few exceptions.)  This, like the brave Confederate soldiers and
their brilliant general of the American Civil War, is yet another iteration of
that terrible tragedy – men fighting well for a terrible cause.
Keegan has a particular fondness for the Polish
contingent.  Having been defeated twice
by the Germans – first in their homeland and then fighting alongside the French
in 1940, the remnants of the Polish Army trained hard to become a modern
effective fighting force.  They cheered when
they learned they were heading into battle, wanting to avenge their nation’s
honor.  They got their wish.
In August, with the German 7th Army bottled up,the Polish division was the cork.  The
Germans attempted their break out and through a night of desperate, ceaseless
fighting, the Poles held their position.
The painful part is that even in their most desperate hours, the Polish
division sought news from home.  The
Polish resistance had launched a massive uprising against the Germans, hoping
for aid from the approaching Red Army.
But the Red Army paused, allowing the Germans to demolish the Polish
forces.  Their situation was
desperate.  The cities sewers were their
lines of communication and men ran into downed aircraft engulfed in flames to
retrieve ammunition.
Across France and the Benelux countries is a swath of towns
liberated by the Poles.  But they would
have to wait another forty-five years for freedom to come to their own country.
Far more men were engaged on the bloody eastern front, where
enormous armies of men and machines faced off in massive battle after battle.  But Keegan makes a compelling case that the
victory the allies won on D-Day was perhaps the greatest of the war and one of the greatest military achievements of all time.  It was the wealth of France the kept the Nazi
war machine running.  The granaries,
mines, factories, and people of France all provided the critical supplies
needed by the German forces.  When these
were effectively moved from one side of the ledger to the other, the Reich
could not sustain its war.  Large numbers
of young Frenchmen were in hiding, to avoid impressment or work that would
support the Nazis.  As France was
liberated these men hastily formed a French Army, rejuvenating the allied drive
just as the British and Canadian levees were tapped out.
All of this made fascinating reading, but I thrilled just a
bit when, during Keegan’s chapter on the British Army on D-Day, he mentioned
the Scottish Division.
A Scottish Division was bound to include my favorite
Scottish regiment, the Argyll and Sutherland Highlanders.
How does a Jewish kid from Baltimore come to have a favorite
Scottish regiment (is he a dork)?
And if anyone is going to have a favorite Scottish regiment, shouldn’t
it be the Black Watch?
For answers, tune in tomorrow…

PrevPreviousDo Drone Strikes Increase National Security?
NextDystopia: What if the US conquered Canada in 1812?Next