Earl Weaver: A Man in Full 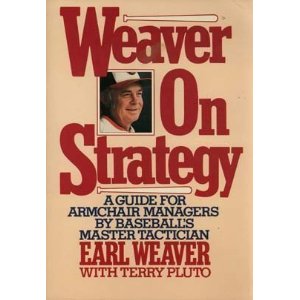 I grew up with the Orioles of the late 1970s and early 1980s. They were an exceptional team with many great and good players – future Hall of Famers like Eddie Murray, Cal Ripken, and Jim Palmer. But what made them champions was not their stars, but the deep bench of players who, when played in the right situations, could be effective. Setting these ever-changing line-ups was the chess-master, the late Earl Weaver.

He was best known for his frequent altercations with umpires. But this was merely a surface, beneath which his keen strategic intelligence operated. Now, in the era of Moneyball, everyone knows about the applications of statistical analysis to baseball. But time and again, analysts have found truths that Earl Weaver discovered on his own. He famously kept files of statistics of every batter he had against every pitcher they faced and every pitcher he had against every batter they had faced. He carefully designed his line-ups to maximize his advantages – while keeping his options open. Baseball is ultimately a game of percentages. A batter has roughly a 30% chance of doing something effective. Weaver would do everything and anything he could to increase that likelihood because over a 162 game season increasing that chance to 31% would pay off. So he would keep players like Benny Ayala around. Ayala was not a great fielder and wasn’t fast, but he could hit a certain class of pitcher. Other managers would focus on what Ayala couldn’t do – but Weaver saw what he could do and determine if he needed those particular skills enough to keep him around.

One example, summarized from his terrific Weaver on Strategy gives a sense of how he thought things through (but bear in mind he did this about everything):

In 1981 I wrote Steve Stone into my lineup every day as the designated hitter. Stone is a pitcher, and I naturally did not expect him to hit. In fact, the first time I did it, Stone wasn’t even with the club-he had flown ahead to the next city on the road trip… During this season I often platooned Benny Ayala and Terry Crowley as my designated hitters. Let’s the Orioles were playing Cleveland and Len Barker was staring for the Indians. I’d have Terry Crowley in the lineup against the right-handed Barker. But suppose the first five hitters get to Barker and knock him out. The Indians bring in Rick Waits, a lefty. I wouldn’t want to use Crowley against Waits, so I would have to bat Ayala for Crowley. In the process, I’ve lost Crowley without him making an appearance. That’s wasting a player. Or what if the pitcher takes the mound, throws to a couple of hitters, and the leaves because his arm hurts. It may only happen twice a season, but there is no reason to waste a player if it can be avoided.

By listing a pitcher such as Stone as the DH, I have the option of sending up Crowley or Ayala.

People have observed that Weaver won because he had great pitchers. True, but… Besides Palmer, none of the Oriole pitchers were all-time greats and many of them were only great under Weaver. One element was that Weaver combined quantitative and qualitative analysis of baseball – he had a very shrewd eye for baseball talent. He could look at a capable journeyman pitcher and see how much better he would be in Memorial Stadium with Weaver’s defense around him (Weaver was big into defense.) Also, Weaver – again long before this was analyzed systematically – had a great sense of when a pitcher had had enough. He stayed with a four-man rotation till the end, when almost everyone else had turned to the five-man rotation. He believed – and it has since been validated – that as long as you don’t force a pitcher to throw too many pitches in a game he didn’t need the extra day of rest (and if you did push a pitcher’s arm past its limit the extra day of rest wouldn’t help anyway.) He describes in detail the signs that a pitcher is really tiring and I read somewhere that he was one of the first managers to systematically use radar guns during the game because he knew when a pitcher was losing velocity he was done.

All of this came at a cost. To run a time this way, Weaver had to be tough with the players. He had to be ready to cut them from the team when they weren’t useful and he didn’t dare get close to them. It was an attitude he forged in the minor leagues when he had to cut hopeful kids and “look every one in the eye and kick their dreams in the [butt] and say, ‘Kid, there’s no way you can make my ballclub.'”

Weaver continued, “If you say it mean enough, maybe they do themselves a favor and don’t waste years learning what you can see in a day. They don’t have what it takes to make the majors. Just like I never had it.”

In a beautiful column about Weaver after his recent death renowned Washington Post sportswriter Thomas Boswell wrote about the toll this took on Weaver and how exhausting Weaver found it to always be “the grown-up.” On Brooks Robinson Day (honoring the beloved Oriole 3rd baseman, Weaver said, “I’d like to be like Brooks, the guy who never said no to nobody, the ones that everybody loves because they deserve to be loved … those are my heroes.”

Weaver knew himself and learned that truth illustrated in novels that shapes our lives, that within each of us, beneath the surface lies the opposite. Nothing exists without its contrary and we must each come to terms with that.

Weaver retired early, he was only 52 (he made a brief, unsuccessful comeback a few years later.) He gardened, walked on the beach, took his wife out to dinner, and went to Hialeah to play the ponies.

Did Earl Weaver, the “sorest loser that every lived,” a man who exerted every iota of a rather formidable genius for tiny advantages, find peace at the track knowing full well that, “all horseplayers die broke?”