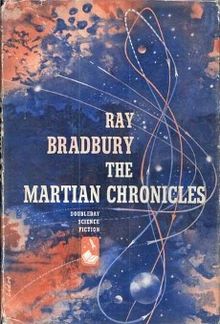 I recently listened to Ray Bradbury’s haunting, elegiac classic The Martian Chronicles. In the introduction, Bradbury explained he was trying to write Winesburg, Ohio on Mars. An apt description. I can see why I didn’t appreciate Bradbury as a kid. I read a little of his stuff, but he didn’t grab me like Heinlein, Asimov, Orson Scott Card and many others. Not enough politics or action, too mysterious. I can begin to appreciate him now.

There were dated bits of the The Martian Chronicles. Nearly everyone is white and American, Bradbury’s beloved small-town middle America moves to Mars. There are some tired tropes of henpecked or ignored housewives. But these are mere quibbles. (The fact the Bradbury was not focused on technology did not mean he couldn’t “get” it with the best. The house in “There Will Come Soft Rains” basically nails the coming smart home.)

In just a few lines, without any explicit or lengthy descriptions, Bradbury evokes a vast ancient civilization. Later, when the Martians are nearly gone and humans dominate, Bradbury describes the abandoned Martian civilization as “chessboard cities.” 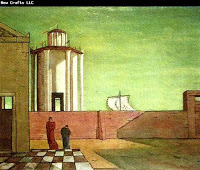 I love ruins, and vast mysterious still spaces. One of my favorite paintings is The Ideal City (which can be seen at the world renown Walters Art Museum in my beloved Baltimore and is also the source of the image on the right) and I love the metaphysical work of Giorgio de Chirico. The Martian Chronicles almost seemed like a literary accompaniment de Chirico. (I threw in an example of his work for good measure – on the left, as well as the header to the blog above).

And Columbus Day
So, it’s a good book – what’s The Martian Chronicles got to do with Columbus Day?

When Earthmen came to Mars, human diseases wrecked the Martians. But more than that, the Martians were telepaths. The read human thoughts which quickly those thoughts changed their world, leading to insanity for some and tearing their world apart. At the same time, once Earthmen were all over Mars, Martian ideas “infected” Earthmen as well. The telepathy was a double-edged sword.

The Europeans brought diseases for sure and a capacity for rapacity. That being said, I’m not convinced the Europeans were more bloodthirsty than anyone else, they just had a better away game. The Aztecs, to take one example were hardly pikers in the conquering business, and in some alternate history in which they acquired ships and gunpowder would they have been gentle to their European subjects? (And yet they didn’t, why not?)

I’m not apologizing for the Europeans, who did terrible things. But what interests me is how – not just in the Americas – but all over the world, advanced civilizations basically folded in the face of a European onslought. Sure, the Spanairds had some technology, but the Aztec and Incan Empires were vast and sophisticated in their own right. Surely a few hundred Spanairds weren’t that terrifying to emperors commanding armies of thousands along with millions of subjects.

I am also reminded of Chinua Achebe’s stunning When Things Fall Apart, in which a sophisticated, pre-modern society collapses before the ideas brought by the British. (Note that Christianity quickly attracts those at the bottom of the social order, offering them a new and more expansive vision of life.)

And what of Asia, where enormous ancient empires fell before the Europeans. The European technological advantages in the 17th and 18th century (before steam power) were not great compared to the Indians and the Chinese. Yet the Brits – out of their back pocket, without really thinking it through – managed to take control of the vast Indian subcontinent.

In another time and place, long after Columbus, Saul Bellow paraphrased Elie Kedourie, “Political theory was the most devastating export of the West…”

Telepathy indeed. The Martian Chronicles are food for thought on Columbus Day.

PrevPreviousPakistan’s Endangered Leopards: Time to Change Spots?
NextVisit to the Postal Museum I: Echoes of AnthraxNext