Skybolt: A Historic Case Study of Pressuring an Ally

There has been some discussion about how the United States is carrying its allies and needs them to step up to the plate. I won’t mention any specific presidential candidates so as not to violate a certain self-imposed rule. But our relationships with our allies are a complex web of dependencies. Nothing is simple and there are no easy gains. The recent discussion has inspired to me write about…

Skybolt!
It was an air-launched ballistic missile that the United States started developing with the United Kingdom in the 1950s. Under JFK, Defense Secretary Robert McNamara determined Skybolt was a boondoggle that was much too expensive. The sensible thing to do was kill it. 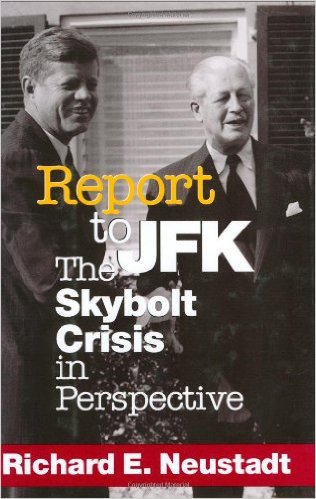 But for the British it was very important. It was their only path to maintaining an independent nuclear deterrent. There was an alternative, the Polaris submarine launched ballistic missile, but the U.S. didn’t want the U.K. to have it (for various reasons that were very important at the time.) The issue was playing out up and down the U.S. and British national security bureaucracies until, at a summit at Nassau in the Bahamas, JFK was blindsided on this issue.

He was not happy and had the distinguished scholar of the presidency Professor Richard Neustadt, write a report in April 1963 and it was handed in on November 15. Kennedy read it over the weekend and handed the report to the First Lady and said, “If you want to know what my life is like, read this.”

Sadly, that was the only feedback Neustadt received. The President travelled to Dallas on November 22, the rest of the story is well-known.

The Report
Having survived the Cuban missile crisis in October 1962, Kennedy looked forward to his meeting with Prime Minister Harold Macmillan. Then, as now, British Prime Ministers and U.S. Presidents were often friends – as much as two politicians can be friends.

But the British delegation was not in good humour, and they demanded a resolution on Skybolt. The discussion continued, the Americans were unwilling to continue the program and sought formulae in which the British would be part of a joint NATO nuclear force. But this was unacceptable for a proud nation. There must be Skybolt or the British must have Polaris.

Finally, Macmillan hit Kennedy right between the eyes. Neustadt quotes extensively from the notes National Security Advisor McGeorge Bundy took of Macmillan’s appeal and so will I:


Churchill had told him in 1940 that in logic it was impossible to win the war, but they had gone on. There were lots of people in Britain would would like to chuck it, which would enable them to have better pensions and a more satisfactory life. The….alternative [to a POLARIS agreement] was to say this is a complicated system – The Americans won’t give it to us – we will go and make it eventually and be free. This would be better than putting a British sailor aboard a ship to have tea with the Portuguese. To give up would mean that Britain was not the nation that had gone through its previous history. We should consider that if the people who wanted to give up in Britain came to power, who would make the better ally? Those were the ones we were supporting in Britain by our policies….

He would not engage in anything petty. We could stay at Holy Loch [nuclear submarine base]….Britain could make submarines – not nuclear ones – to carry missiles. This could be accomplished…but costs would have to be compensated elsewhere….They would have to tax their people more as well. Such a course would lead to a deep rift with the United States. He said he would not accuse America….

After that, Kennedy relented and agreed to share the Polaris with the U.K. It led a great expansion of the special friendship.

I could analyze this. Macmillan made his appeal and smart combination of emotional and hard political points. U.K. too had its history and values, which could not simply be ignored. At the same time, there would be an impact on British domestic politics which would not be favorable to the United States. It is not just about getting a deal. There is a relationship that continues on in time and space.

But perhaps I should just let the words speak for themselves. Allow me to quote another eloquent Englishman who pre-dated Macmillan by a few centuries.

For every action there is an equal and opposite reaction.

When you push countries around, expect to be pushed back.